You are here: Home1 / Headlines2 / Best Practices3 / Multiple Hip, Knee and Back Pain Issues: Which To Treat First? 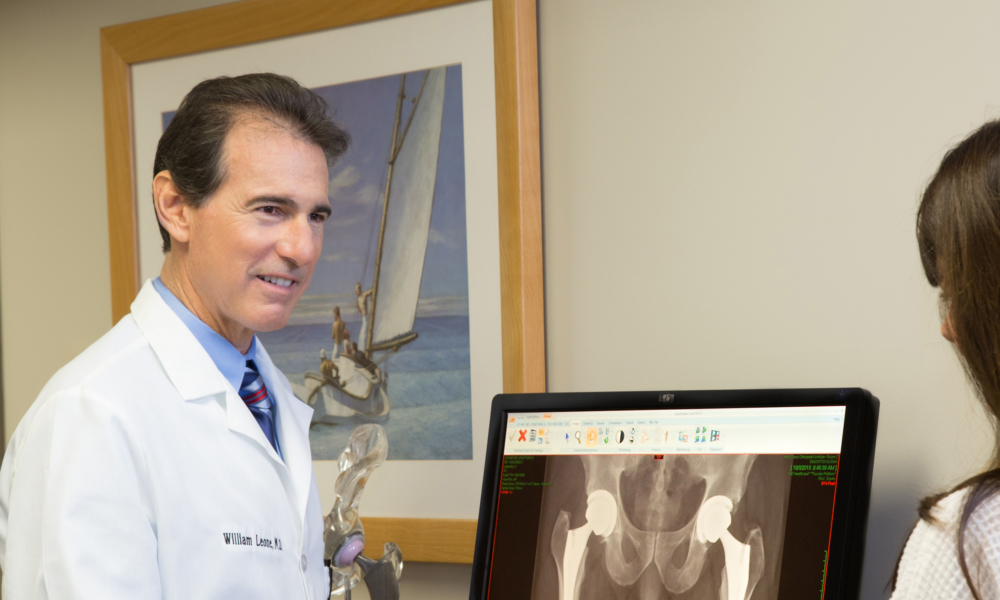 At The Leone Center for Orthopedic Care, I routinely see patients who present with pain and/or disability from arthritic disease in both hips or knees and sometimes a combination of hips and knees. Many of these same patients also have pain from back issues. Questions frequently arise about which problem to tackle first. In this blog, I will share my philosophy and thought process regarding the timing of treatment when there are multiple joint issues. For the purposes of this discussion, I will assume that the hip or knee conditions have failed conservative treatment, hence hip and/or knee replacements are being considered.

Typically, one side will be more symptomatic than the other, even if the arthritic process appears to be more advanced on the less-painful side. I usually recommend operating first on the most symptomatic side to provide the greatest immediate relief and benefit, even if the arthritic process appears worse on the other side. I feel strongly that it’s important to treat the patient and not the X-rays.

I do discuss with patients who have multiple arthritic joint issues that at some future point, the other hip or knee very well may need to be replaced. I also explain that after the first joint is replaced, joint symptoms on the other side often worsen more quickly due to increased activity post-TKR (total knee replacement) or THR (total hip replacement). Additionally, most patients who have undergone a successful THR or TKR become less tolerant of the symptoms on the other side. Many tell me they just don’t want to live with any more pain so they avoid activities that they enjoy. When they’ve experienced how well they can do after joint replacement, often patients will request that the other hip or knee be replaced sooner than they did the first time. I understand and respect this.

Some patients with symptomatic arthritis in both hips or both knees will inquire about operating on both joints simultaneously. In the past, I have operated on many patients with bilateral disease, choosing to replace either both knees or both hips with just one trip to operating room. I have backed away from this approach for a number of reasons. Simply, I think there are more complications. I believe there may be increased risks from a bilateral procedure rather than reconstructing each one separately in a staged fashion. I also think recovering from a bilateral procedure is tougher and a more painful rehab then reconstructing one joint at a time.

The vast majority of my patients now have surgery with a simple spinal anesthetic augmented with a “cocktail of medications” infiltrated into tissues around the replaced joint at time of surgery. The concentration of drugs that I can inject during a bilateral procedure is halved for each side, to prevent an overdose, and may prove less effective. Also, during a bilateral procedure, many anesthesiologists don’t want to administer a spinal because patients must lie in one position for so long. Additionally, the length of time the surgical instruments and the incisions are open to the OR environment nearly doubles during a bilateral procedure, which increases the risk of infection.

When a single joint is replaced, almost all of my patients are out of bed and start walking the day of surgery. This would not be the case with a bilateral procedure. My patients avoid many complications by getting out of bed and walking so quickly, including lessening the risk of a blood clot (DVT), skin breakdown from pressure, urinary retention or GI complications (including ileus and constipation). Also, the likelihood of a post-surgical blood transfusion is extremely small after single joint replacement, while there is a much higher probability of transfusion when both joints are replaced during a single anesthetic session.

Nearly all of my patients go home just one or two days post-surgery. However, if both joints are replaced at the same time, there is a much higher probability that they will not go home but rather to a rehabilitation facility. I much prefer that my patients go home because they are happier, seem to get well quicker and even have fewer complications.

Now, I stage bilateral reconstructions. Some patients want the additional side done quickly and when we remove their suture from the first procedure two weeks post-op, they return to hospital later that week or the next to have the other hip or knee replaced. Many wait up to six weeks to have other side done and some even wait several months or longer. We discuss timing together to arrive at a plan that works for each individual patient.

When a patient presents with pain from an arthritic hip and knee on the same side, usually the hip is treated first. There are several reasons for this.

If a patient has a significant knock-knee deformity prior to having a hip replacement, I will discuss with him or her that after THR the knee deformity may look even more severe. This is partially because the new hip joint center may have required medicalization, which could accentuate the knock-knee deformity. Also, many patients will compensate for a severe knock-knee deformity by developing a hip adduction contracture (the inner thigh muscles contract and remain in a shortened position) and pelvic obliquity (the pelvis no longer appears parallel to ground, as it too compensates). I advise my patients that even though their knock knee looks worse after THR, it’s not; the upper compensatory mechanisms are lessened after their hip surgery causing the altered appearance. I also explain that some, but not all, of this initial appearance will improve with time, and most likely when they feel ready, they will need TKR. I find patients are much less concerned when this occurs post-operatively when they are told what to expect ahead of time.

How do I treat someone who is experiencing significant symptoms from an arthritic hip(s) and/or knee(s), as well as symptomatic back disease? First, understand that similar genetics can lead to all of these conditions. Typically, the hip or knee is replaced prior to any surgical intervention to the back. I share with my patients that often, though not always, back symptoms improve after THR or TKR. This is because their body mechanics and the fluidity of their gait improve after the joint replacement, which can relieve some abnormal stresses on the back.

Some patients do present with such significant back disease where surgical decompression has been recommended. Most of these patients will choose to have their arthritic hip or knee condition corrected prior to any consideration of back surgery, because the rehab and results tend to be more predictable. I agree with this decision as long as the back condition is not so severe that it could result in further deterioration and compromise nerve function during the hip or knee surgery. This is another reason why a careful physical examination and history are critical prior to any surgery.

At The Leone Center for Orthopedic Care, my entire team spends time talking with and listening to our patients. When more than one joint is problematic and requires joint replacement, I formulate a plan with my patients based on their symptoms, the physical exam and the radiographic appearance. In this post, I’ve attempted to describe some common scenarios that I see when multiple joints are symptomatic. It is so important to recognize how unique each patient is and each patient-care plan must be customized and communicated to that patient. Our goal is to provide the best outcome as safely as possible with the best overall experience. This requires the whole team.

In Weston Magazine: Master of Orthopedics
Scroll to top