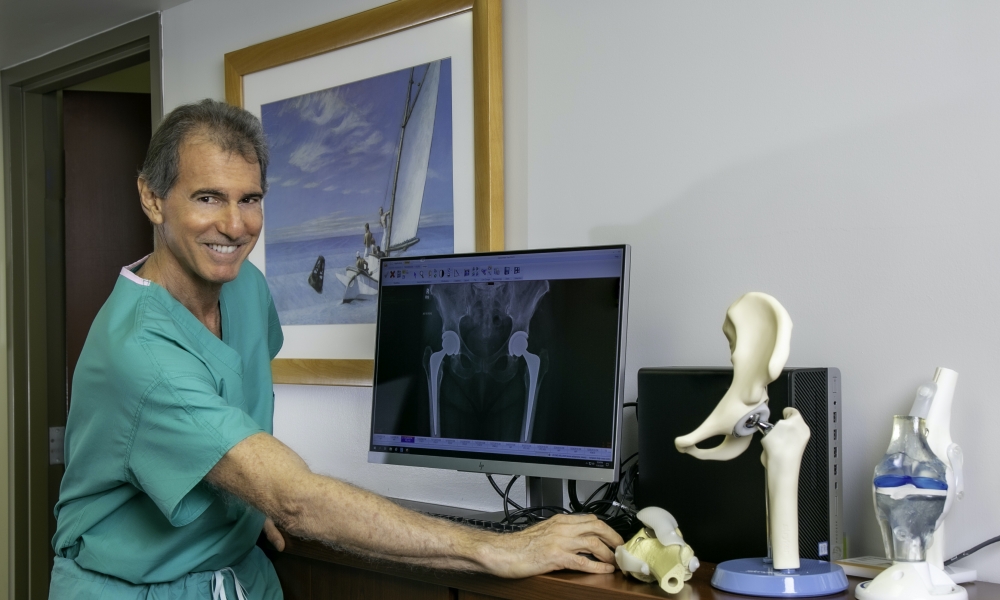 To say that Joel Platt is an active guy is an understatement. As a young man, Joel was an avid baseball player – covering shortstop and almost signing with the Red Sox – until an arm injury caused him to have to give up the game. He continued to play sports while living and working in the northeast, eventually taking up highly competitive club league tennis after moving to Florida.

Several years ago, Joel became sidelined when he began to experience pain in his hips. “It came on fast,” said Joel. “The pain kept getting worse to the point where I could hardly lift my legs to get in and out of my car.”

One day, Joel was out playing tennis when the pain was so severe, he couldn’t make a move. “I’m usually so quick, but my mind could not will my body to move,” he said.

Joel made appointments with several orthopedic surgeons who all diagnosed him with osteoarthritis and recommended that he have his hips replaced. He booked a date to have his first hip surgery, but several friends recommended that he see William Leone, MD, of The Leone Center for Orthopedic Care at Holy Cross Hospital before making a final decision.

“After I met Dr. Leone, I said ‘this is my man,’” said Joel. Joel ended up having two hips replaced by Dr. Leone within 12 weeks of each other.

“The surgeries went better than I expected,” said Joel. He was in the hospital for four and three days respectively and went through physical rehabilitation at home. He was back at work in 12 days.

Today, Joel is as active as ever and back to playing – and winning – tennis tournaments. Recovery went so well that Joel continues to send friends and family to Dr. Leone for hip and knee issues.

“He’s not only a great surgeon and an expert in his field – he’s a fine person,” said Joel. “Dr. Leone is really one of the most caring, considerate and humble doctors I have ever met.”

I want to thank you for doing God’s work and giving me back my life.
Scroll to top